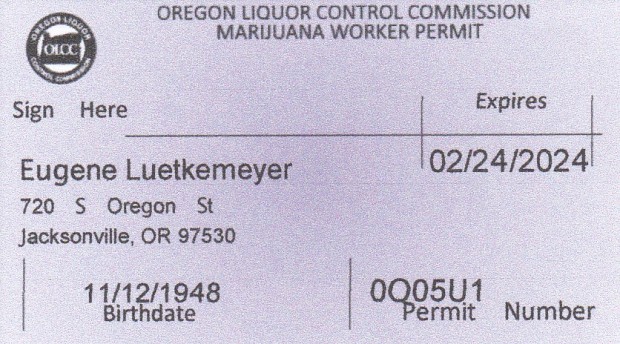 Cannabis is a flourishing industry here in Oregon. There are farms and greenhouses galore and more cannabis retail outlets than hardware stores. They provide a lot of jobs and I’ll be looking for a job soon. I thought I might take one in the business (as we referred to it back in the free-wheeling days of defying prohibition). So I applied for a permit and paid a fee and got investigated and irony of ironies was found certified safe to be employed. My hesitation has been that the business has gotten complicated. There are so many strains of cannabis available, and a panoply of edible options and one needs to be familiar with them all to praise and to pitch them. I would have to do extensive on-the-job training and I haven’t gotten high in five years and not sure I want to again.

But I thought I’d find out. Yesterday I bit the bullet. Actually, I bit the gummy. I went to a dispensary. It was surreal, perusing the multifarious manifestations of marijuana and discussing their effects with the girl behind the counter who wasn’t born yet back in the day. I purchased one gram each of two different strains of weed and ten gummies, which are like gummy bears, only not for kids. The grams were $5 each and the gummies were $24 for ten, or $2.40 per high, which lasts three to six hours. Cheap thrills. The information on the labels of the weed was meticulous: The name of the strand, the date it was harvested, the license # of the grower, the date it was tested in a lab, the percentage of active ingredients, (for example: 15.7% THC, 12.3% CBD) and the Activation Time before it kicks in (in the case of weed: immediately). I didn’t know if this was the world for me anymore but I’d know in a minute: gimme that gummy!

The verdict is in: Reefer dealing redux ain’t happening. My gummy did not take me anywhere I want to go to at this point in my life. Physically I was uncomfortable as when doing mushrooms in the early days and the head trip was neither enlightening nor recreational. If you take ten of my thoughts and toss them into a pail of water and stir the water with your finger till they are circling the bucket like minnows chasing each other’s tails, you have a picture of my usual state of mind. It’s not a state I care to stimulate.

And there’s not enough time left in my life for getting stoned. There’s too much good stuff left to be done and if getting stoned doesn’t enable me to do it all better and faster—and it won’t—I shouldn’t be getting stoned.

Nor is it compatible with my community these days. Most of the people I interact with are retired professionals—intelligent and educated and creative, but mainly straight. Nobody breaks out the pot at the meet-and-greets. I can’t be high around people who aren’t high themselves and who don’t know that I am, and I can’t avoid the community: you can’t walk your dog down the street without meeting neighbors walking their dog down the street and having a conversation (with the neighbor, not the dog, though I might prefer talking to the dog if I was high).

So I’ll set my getting-stoned days aside for now, thank you very much, and I’ll get my high at the keyboard or on the trails in the woods all around me or in the gym or back in the dojo. That said, I do have my worker’s permit and don’t rule out a paid gig harvesting or trimming which I could do without praising the virtues of a particular product as I would have to do in sales.

May it be you if you’re passing through…

This site uses Akismet to reduce spam. Learn how your comment data is processed.