A novel by Laurie Foos

It is impossible not to be moved by Toast, a heartwarming tale of a day in the life of the Hamiltons and the joys and pains of raising an autistic child. Poignant in its brevity (a mere 94 pages), it is a story you will read in a single session and be glad you did. Young Will, a child “on the spectrum,” is normal in many ways. He loves Pizza. He loves McDonald’s. He loves video games, especially Minecraft, in which he blows up his sister Mia’s crops as fast as she can plant them. But he has his quirks: he marches in place; he must line up his stuffed animals on their shelf before going to bed; he converses in movie quotes (“You are made of plastic. You are a child’s plaything!” he declares, quoting from Toy Story); and especially, his toast must be prepared just so, perfectly tan, not too brown. Will is unsettled by changed—he has meltdowns—and tonight will present perhaps the biggest change in his young life: he will have a baby sitter! Is she up to the challenge? Can she adjust to his atypical behavior? And most importantly, can she make toast to his demanding specifications?

Sharing the stage with young Will are his empathetic and protective sister, Mia, and their mother and father who are loathe to leave him for the night; and off-stage is Gram, who has passed on but has a permanent warm spot in his heart. Altogether, the Hamiltons are a family whose strong bond of caring allows an exceptional child to mature in an atmosphere of love and solidarity. Toast is an endearing read for the young and old alike.

A novel by Ginna Gordon 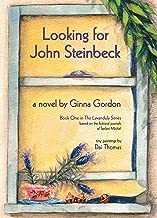 SET IN THE SYLVAN COUNTRYSIDE of Carmel Valley, California, Looking for John Steinbeck is the first installment of the Lavandula series, the saga of the Wyman family, Jock and Maria, and their daughters, granddaughters, and sons-in-law. We see familial drama play out through the eyes of blooming, precocious cousins Stevie, Jo, and Tate, as they witness and wonder at the intrigues of their elders from the safe haven of the Hobbit House, their rustic charming clubhouse in the woods, and wonder, too, what lies in store for them as the future draws near.

Each character in Looking for John Steinbeck is vividly rendered—we come to know them and love them—and the distinctive points of view of all are intricately woven into a tapestry of complex emotions and engaging theatre. Much like the method of William Faulkner in his break-through novel, As I lay Dying, the narrative of Ms. Gordon’s story unfolds through the quickly alternating points of view of its characters. Chapters range in length from a few pages to a mere few words, the shortest being: And those shoes! Skipping lightly from one point of view to another, the narrative remains fresh and the reader remains enchanted.

Gordon’s mastery of craft is commendable. A lover of words and sentences, her prose sparkles and delights and never fails to deliver a gem of insight: “It’s funny how certain moments are captured in a frame, while most moments in life are gone like dust motes in sunlight, and barely signify. I think there are only a handful of those crystal clear, frameable highlights: falling in love, having a baby, reaching a goal, meeting a true friend, connecting with the Creator.”

All in all an immensely pleasurable read that ends with a mysterious, beckoning conclusion that can only be satisfied by reading its sequel, Deke Interrupted. See you there!

A Journal of Prison Writing

One does not have to be imprisoned to get inside the minds and hearts of those who are. One can read Don’t Shake the Spoon, volume 2, a collection of writing by Penitentiary inmates in Florida, and get closer than might be comfortable to the truth of perpetual confinement. The reader soon realizes that the restrictions imposed by the pandemic now gripping the nation are relatively benign.

Don’t Shake the Spoon is a publication of Exchange For Change, E4C, a program founded by journalist Kathie Klarreich in 2013 that teaches writing to inmates in the Florida prison system and promotes letter exchanges between inmates and students of writing on the outside. E4C allows the incarcerated to rise above their confinement and express their true selves, to reclaim a semblance of the freedom denied them. The voices emerging from the 36 pieces in this collection are as diverse as the lives of their authors … voices whispering, wailing, pleading, cajoling, accusing, lamenting.

In Packed Bags, author Emilio C. Fernandez grieves not for himself but for his mother: “she will unravel like a worn-out piece of clothing as this incarceration pulls on the thread of her emotional stability … Will her health last? What about her sanity? Every sliver of hope is a termite-eaten rung on a wooden ladder.”

In Are you Kidding?!: A Lifer’s View of the Death Penalty, James Doyle takes issue with those well-intended liberal intellectuals who suggest the death penalty is inhumane. His sister, Dianne, the last living member of his family, has died at the age of 81. “The last thread connecting me to my family has been severed,” he laments. “Yes,” he concludes, “I have a life sentence. Yet, if nothing changes, my end will be no different than it would have been if I had a death sentence: I will die in prison … The death penalty is truly the humane option.”

Parnell Smith, too, pines for what is lost. In  Basketball Game: 50 and over, a group of aging cons play basketball. Smith humorously reveals that their game is more an inventory of physical ailments than a display of athleticism. He concludes on a somber note: “Fifty and over. So is our game days.”

Today (or A Transgender Type of Day), by SLM, recounts the tedious daily travails of a transgender behind bars: waiting in the pill line to pick up hormones that never arrive; months of futile efforts to make an appointment with an endocrinologist; the lewd seeking eyes of the depraved fellow inmate who thinks because she’s transgender she wants sex with men, especially with him.

In Through the Rickety Door, Gustavo Guerro recounts how “Narcotics and psychotropic medication created an alternate reality, a doppelganger who could navigate the hazardous waters of life in prison without the debilitating fear that coursed just beneath the surface. I experienced a form of chemical anesthesia with such surgical precision that it obliterated anything that ever brought me pain.”

The reader is treated to a smorgasbord of styles and literary forms. In the mystic-leaning Merge With Me, author Wil-Lie employs verse to show the path to freedom:

There is no stairway to climb

To get to heaven

No ocean to cross to be free

All you have to do is seek the key

And then you merge with me

In Three Short Plays, a dialogue between characters Madd Jack and his Beloved Bree, by Brendan L. Terry, we are treated to the kind of sublime insanity that a prisoner succumbs to in order to do his time and, ironically, to remain sane.

From the intelligent and tightly composed free verse of Pedagogy of a Dutch Neger, by Giovanni O. Sairras, we learn that the myth of white Supremacy that engenders racially inequitable mass incarceration is not confined to the borders of America:

As the unfortunate offspring of a Christianized third-world

we’ve all been afflicted

By the myth of black

Its presence permeated our wretched existence:

during the fiery Sunday sermons,

over the solemn prayers

even across the steep hills and valleys tapering into the

of our small Dutch republic where disgraced Maroon settlements

Many works blur the lines of literary form. Statue of Liberty, a prose piece by Juan Leal Esquival, is replete with internal rhyme. He asks of Frederic Bartholdi, sculptor of the Statue of Liberty: “Would he still make you 151 feet tall? Given the fact that President Trump has made you seem so small! Would he still call you Liberty enlightening the world? Since that is not so, especially not to Mexico. You see, this President wants to replace the golden door with a border wall, and the Dreamers? His motto is, deport them all!

There is so much to recommend in this collection! So many gems to turn over to catch the glittering light within! The Luncheon, by David Subil, is subtle, deft and lovely. Butterfly Effect, by Gary Fields, is brilliant and true, a balanced presentation of a preferred state of mind, a latter-day As a Man Thinkethfor the imprisoned soul. For You, by Michael Gonzalez, sums up concisely what all imprisoned souls would have us acknowledge: “I’m better than the worst thing I ever did.”

Are not we all better than the worst thing we ever did?

It is no simple matter to finish this book in a single sitting. A story might stun you, startle your status quo, cause you to ponder the grim fate of its author and realize he is more than an abstraction. It is one thing to profess to care about the plight of the incarcerated and to rail against the injustice and inequities that brought us to this deplorable state; it is another to get inside their hearts and minds, to hear their voices, the sounds of their souls crying out, as we indeed hear them in this dark and disturbing collection.